This is the best product I have ever used on my skin and I tried a LOT of expansive brands. It helps with redness and overall skin tone. Please do not ever stop making this stuff... ...»
Helena

It is true, this product does leave the skin silky smooth! I can highly recommend using it in your masks... ...»
Mati Fuller

excellence product, very good and made my skin soft and smooth just like baby's skin. Thank you john.. ...»
nky
Read all reviews
Featured

SHIPPING SUSPENSIONS AND DELAYS
PLEASE, PLEASE, PLEASE READ THIS!!!!
Please READ this before placing an order, and select the CORRECT shipping option for your country at checkout!
Due to Wuhan Pneumonia Virus (aka Covid-19) lockdowns, and a reduction or cancellation of flights by airlines, we CAN ONLY ship to the counries listed below!
We have also been advised to expect delivery delays at your end, due to lockdowns and reductions in services by post offices/mail delivery companies in your country, and yes, that INCLUDES USA customers!!!
We CAN ship to:
EMS only ! (Do NOT select Registered Airmail at checkout)
NORTH AMERICA: Canada
EUROPE: Switzerland, Sweden, Czech, Belgium, Italy
OCEANIA: Australia
I repeat, AUSTRALIA will ONLY accept EMS!! So, please stop
selecting Registered Airmail at checkout
Registered Airmail and EMS:
NORTH AMERICA: USA (NOT including Hawaii and Guam)
ASIA: China, Japan, Korea, Vietnam, Indonesia,Thailand, Malaysia, Singapore, Hong Kong, Macau, Philippines
EUROPE: France, Netherlands, Germany, Poland, Denmark, Norway
Oceania: New Zealand
IMPORTANT: If your country is NOT in the above lists, then we CANNOT ship to you at the moment.
If your country does not accept Registered Airmail, then do NOT select it from the shipping options at checkout!
Home » ACTIVES » Tinosorb M (Bisoctrizole)

Tinosorb M is the first UV filter to combine the two worlds of organic filters and micro fine inorganic pigments: it is a 50% aqueous dispersion of colorless microfine organic particles, which are less than 200nm in size and is dispersible in the water phase of an emulsion. Tinosorb M exhibits the widest UV absorption and delivers triple action: UV absorption due to the intrinsic photostable organic molecule, light scattering and reflection as a result of its microfine structure.

Tinosorb M is an innovative UV filter with a hybrid technology that combines organic filters with inorganic micro-fine pigments. It a water soluble ingredient that is added to sunscreens to provide additional UV absorption. Tinosorb M is presented as a 50% aqueous dispersion of less than 200nm micro-particles which can be easily incorporated in a sunscreen in the water phase of an emulsion. It has numerous advantages: easy to use, can be cold processed, efficient at low concentrations and contains no preservatives.

Recent research showed that a microfine organic-inorganic technology ensures enhanced SPF and UVR coverage, because the two components have a synergic effects [1]. Tinosorb M is acts both as an organic UV filter by absorbing the UV radiation and as an inorganic filter (due to the microfine pigment particles) deflecting the ultraviolet radiation [2]. 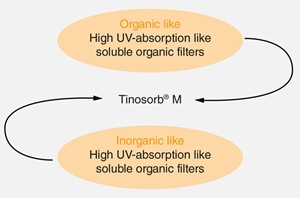 Tinosorb M is very stable [3] and highly efficient in protecting against both UVA and UVB radiation   due to its triple action: UV absorption by a photostable organic molecule, light scattering and light reflection by its microfine structure. This enables Tinosorb M can absorb both UVA and UVB rays, providing a complete protection against the whole ultraviolet spectrum.

The active ingredient in Tinosorb M, Bisoctrizole is a broad-spectrum sunscreen that absorbs UVR and due to its microfine structure, with particles smaller than 200nm also reflects and scatters. Thus, Tinosorb M is able to succeed where other organic UV filters do not, especially in the UVB area. Research shows that formulations with Tinosorb M have efficiency comparable with zinc oxide (ZnO) and titanium dioxide (TiO2) [4]. 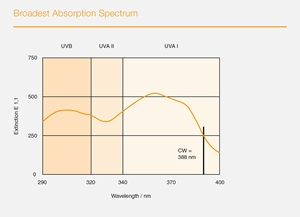 Studies assessing bisoctrizole’s safety showed that when formulated into a sunscreen, bisoctrizole has minimal skin penetration, which makes it completely suitable for cutaneous use [5]. Also, unlike other chemical (organic) sunscreens, Tinosorb M is very stable when it comes to UVR photodegradation. Furthermore, bisoctrizole acts as a stabilizing agent for less stable compounds such as avobenzone [3]. Regarding the concern that like other organic UV filters, BASF’s Tinosorb product range may disturb the estrogenic balance, by interacting with the estrogen receptors, laboratory research showed that tinosorb products are safe. No estrogenic activity was registered [6]. Concluding, it can be said that Tinosorb is not only one of the most efficient sunscreen ingredient but also that it is very safe for use.

Note that some studies (by the same authors) indicate that Tinosorb M, containing decyl glucoside, is a frequent cause of allergic contact dermatitis.

We suggest that you start out with using a small percentage of this UV filter, test it first on the inside of your elbow for a period of time and, if there are no problems, gradually increase the amount (up to 10%).
Assay: 50% Bisoctrizole
CAS#: 103597-45-1
INCI: Methylene Bis-Benzotriazolyl Tetramethylbutylphenol (and) Aqua (and) Decyl Glucoside (and) Propylene Glycol (and) Xanthan Gum
Appearance: Aqueous white dispersion
Odor: Trace characteristic odor
pH: 10.5 - 12
Solubility: DISPERSABLE in water phase
Suggested percentage: 1 to 10% (TINOSORB M is approved as UV filter on part I of Annex VII of the European Cosmetics Directive 76/768/EEC in concentration up to 10%)

Storage: Cool, dry place. Do not freeze. Keep away from light and moisture!
Manufacturer: BASF